Toronto’s Newest Mural is Truly a Sight to Behold

A few buckets of paint. Two paint brushes. Hundreds of spray cans. That’s what it took for UK street artist Phlegm to complete the massive 8-storey mural that now rests on the west side of 1 St. Clair West. It’s truly a sight to behold. From a distance, the 8-storey  human form can clearly be seen sitting back in a contemplative pose. But the power of the piece is in the details that slowly emerge as you draw closer. Let’s explore how the St. Clair mural came to be.

Phlegm is an anonymous street artist hailing from the United Kingdom’s own Steel City, Sheffield. Phlegm originally gained prominence through his ink drawings and comics that portrayed highly detailed figures and characters that drew the viewer in. It was not until he started painting his creatures as murals that he received more widespread fame. He has received worldwide recognition for his fantastical scenes of curious beasts, mystical contraptions, and shrouded figures. His pieces can be found all around the world – across England, Germany, Norway, Australia, and now, Toronto, Canada.

Over the course of just twenty-eight days Phlegm arrived to the site and painted from 8AM until the sun baked him and his assistant, Stephanie Bellefleur, off the wall. Phlegm would burn through around 10 spray paint cans a day, adding detail to the mural at a rapid pace while Bellefleur assisted with the logistics, such as working the swing stage, managing supplies, and providing an artistic second opinion when needed.

But how did this project come to be?

In partnership with the City of Toronto’s StreetARToronto program, the project was initially conceived and co-funded by Slate Asset Management, which owns all four corners at Yonge + St. Clair. Slate was looking for something big to kick off a campaign that will revitalize the neighbourhood and foster a new vibrant culture. “We saw a tremendous opportunity as the whole  area  had  been  overlooked –  we  didn’t  see  any  reason  for  that,”  said  Slate Managing Director, Lucas Manuel.

With StreetART, Slate also brought in award-winning public arts organization, the STEPS Initiative, to produce the public art landmark on the western wall of their 12–storey building. STEPS is a Toronto-based organization that allows citizens to take action in creating more vibrant and connected communities through what they call ‘public space ARTivism.’ CBRE, CIBC, Rexall, and Dulux paints also generously supported the project, with Ward 22 City Councillor Josh Matlow giving a strong endorsement. “Yonge and St. Clair is one of Toronto’s most desirable neighbourhoods, and creating a landmark piece of public art in collaboration with one of the world’s most influential street artists, reflects the area’s unique geography.” 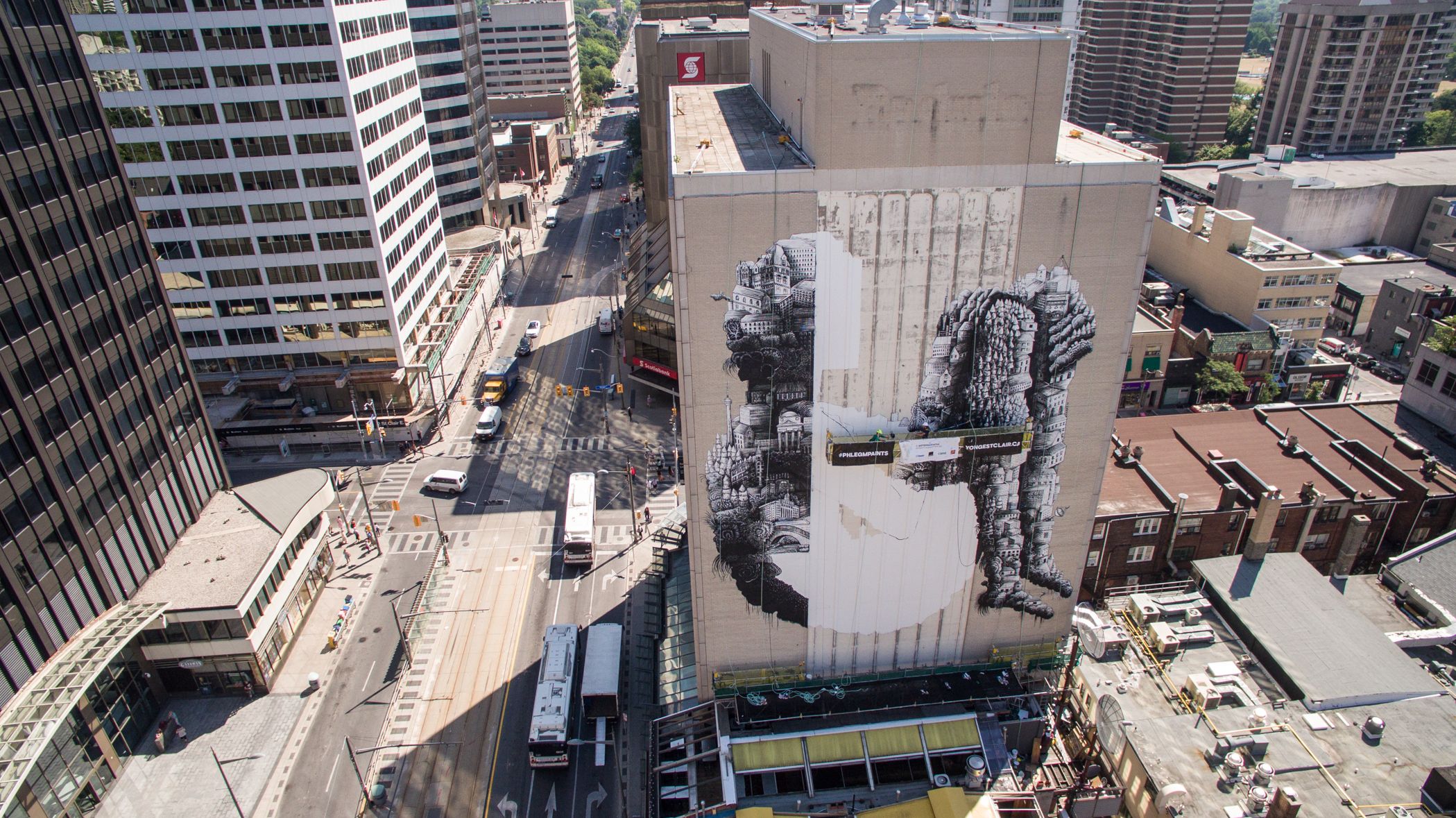 In regards to the piece itself: “I chose to work with the human form because it’s really what the city is,” explained Phlegm during an interview with STEPS prior to the project “We view it from the inside as a small part looking out at this huge, almost unfathomable complex network. Like a body, a city has all its functions.” Phlegm sought out to create a piece that integrates the natural urban elements and lush landscape of the Yonge + St. Clair community as an important part of Toronto.  Amidst iconic Toronto landmarks like the CN Tower, Royal Ontario Museum, and Gooderham Building, sits the local Yonge + St. Clair pub, Scallywags – a nod to the neighbourhood and the venue sitting right below the piece, with a direct view from their rooftop patio.

“Roads move through it like arteries.” Phlegm continues, “the geology of land informs the shape of the city like a skeleton. Buildings fill the space like skin and muscle. The movement of water and waste, the parks and green space like lungs.” With STEPS, Phlegm’s design was surveyed with extensive outreach to the Yonge + St. Clair community to help determine how the piece can best reflect the neighbourhood. The pensive figure is the collective result of hundreds of community input surveys, conducted both online and in person. With the addition of Toronto landmarks, the city’s extensive ravine system is also represented in the work.

“I like to imagine the huge population of a city, not just now but by everyone who has ever lived to make it what it is today,” finishes Phlegm. “A city is really just a mark left by all those billions of people that added to it and made it what it is.” And now Phlegm has left his mark on this city.

To read more about the project, please visit the news section of YongeStClair.ca.